EAMC Reached Critical Levels in July. Here's How the Hospital is Fighting Covid-19

Perhaps just like any other front-liner doing battle against the invisible enemy that is the novel coronavirus, Dr. Alfonso Nuñez would wake up scared that he might contract the disease, or worse, pass it on to a loved one. Yet Nuñez would report for work every day, nonetheless, for the past six months since the pandemic was declared in March. He wasn’t because he was a brave man. As medical chief of the East Avenue Medical Center (EAMC), he knew he needed to rally his equally scared and already exhausted troops.

As early as February, EAMC allocated five isolation beds for possible COVID-19 patients even before the first local transmission was reported. By April, the Department of Health (DOH) directed the hospital located in Quezon City—the biggest city in Metro Manila that accounts for almost a fifth of the total infections recorded in the region—to increase its bed capacity for coronavirus patients to 30 percent, of its total 600-bed capacity. The number of positive cases, however, kept on surging despite strict community quarantine restrictions in place.

“If Meralco did not energize our freezer van that served as a makeshift morgue, pilay na pilay kami,” Nuñez said.

EAMC had to request additional electricity connection from Meralco, which the power distribution firm energized within 24 hours given the urgency of the situation: the state-run hospital needed to operate a mobile mortuary freezer as the number of cadavers exceeded its morgue's five-body capacity.

Come July, when the metropolis was placed under the more relaxed General Community Quarantine, the situation at EAMC reached critical level with all dedicated COVID-19 beds occupied. And for at least a week, the hospital even breached its 100 percent capacity for positive cases.

"We had to be innovative—spaces not intended for COVID patients were used; all resources were mobilized, including stretchers and wheelchairs; and non-COVID wards were scaled down so we will have enough personnel," Dr. Nuñez recalled.

The city has recorded more than 20,000 COVID-19 cases as of Sept. 24, based on the tracker of DOH. Data from the local government, however, put the number of virus infections at a slightly lower figure of 18,063 as of Sept. 24, but with suspected cases based on contact tracing at 18,500.

And because the novel coronavirus does not discriminate, some of EAMC's own frontliners found themselves on the receiving end of treatment after contracting the disease.

At least 259 of the hospital's 2,400-strong healthcare workforce tested positive for the disease, of which three—a doctor and two administrative personnel—did not make it.

"Our number of infected frontliners is fairly low compared to other hospitals. Most of them were asymptomatic and mild cases, and close to 70 percent got the disease from outside the hospital," Dr. Nuñez said.

Support from the MVP Group

Since the number of local cases continues to increase, and with the World Health Organization's forecast that the pandemic could last for two years, EAMC decided to convert a new building that was originally intended as a wellness hub into a COVID-dedicated facility.

The hospital got a P45-million shot in the arm from Meralco and PLDT to operationalize its infectious disease facility, including the turnover of hospital beds, intravenous stands, monitors, and ventilators, among others."We hope that our assistance to the East Avenue Medical Center for its new COVID-19 facility will help provide quality care for patients, especially during this critical phase of the health emergency,” said PLDT Chairman and Chief Executive Officer Manuel V. Pangilinan during the turnover of the donation last month. 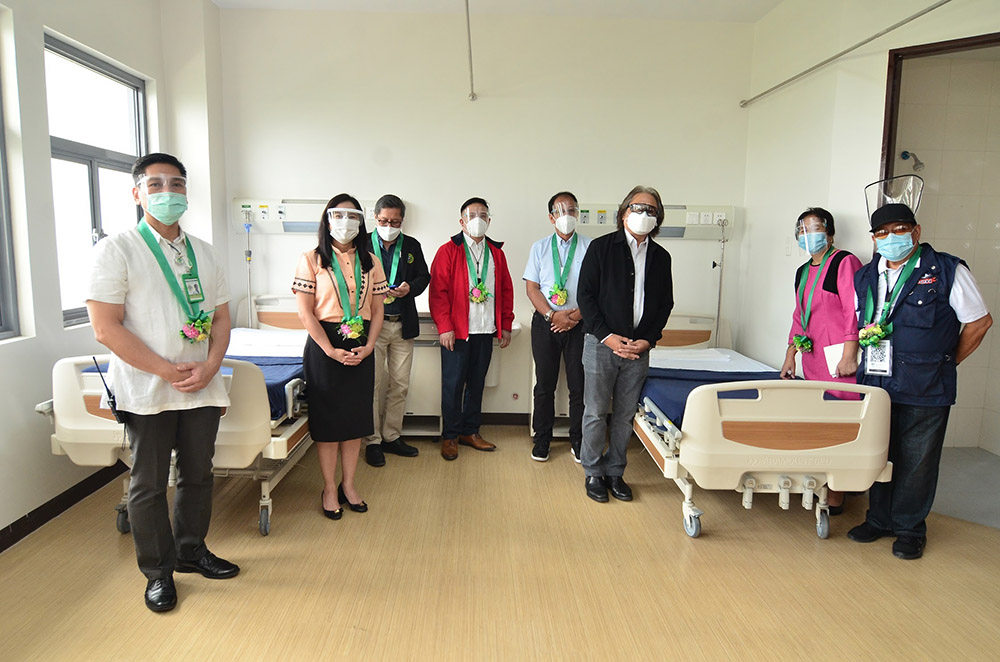 “We are utilizing our resources in order to address the immediate need for hospital equipment in the new COVID-19 facility of the East Avenue Medical Center. This is essential in enabling our hospitals to accommodate more patients, especially during the current health crisis,” added Meralco President and CEO Atty. Ray C. Espinosa.

Meralco has played a crucial role in ensuring the success of the government's COVID-19 response as well as in maintaining a semblance of normalcy in the lives of ordinary Filipinos amid the disruptions brought about by the pandemic.

The company has prioritized DOH facilities, including government hospitals, for additional connections. These were also exempted from power interruptions as frontliners continue to do battle against the novel coronavirus.

Meralco likewise checked the transformer load of all public and private hospitals within its franchise area to ensure reliable power supply.

It also assisted in the conversion of major venues to COVID-19 treatment centers, such as the World Trade Center in Pasay City and the Ninoy Aquino Stadium at the Rizal Memorial Complex in Manila, by boosting their energy capability in anticipation of the projected power demand as more patients get confined.

For Dr. Nuñez, the six-storey Center for Emerging and Re-emerging Infectious Disease, with its maximum capacity of up to 250 beds, has given both frontliners and patients renewed hope in continuing the battle against COVID-19.

"Ang laking tinik ang nawala sa amin,” he said. "No words can describe the life-saving blessings you have given us. We will make sure these will not go to waste."

He is painfully aware that the pandemic is not yet showing signs of slowing down, and people may become complacent to the risks just as donor fatigue might kick in.

"The pandemic is not going away any time soon. The fight is not yet over. If we are down, everything goes down," Dr. Nuñez said.

Still, Dr. Nuñez wears his doctor's coat every day, along with all the other unsung heroes of EAMC.

To learn more, contact your Meralco Relationship Manager or call 16210.