Meralco to comply with ERC ruling on charges

Meralco said it would immediately start preparations to comply with the commission's ruling.

Residential customers will enjoy a net average reduction of 11.5-centavos/kWh in pass-through charges in their electricity bills over the next three months. Photo: iStock

Meralco customers were at the receiving end of some good news as they returned to work after the Christmas break. It was announced that residential customers would enjoy a net average reduction of 11.5-centavos/kWh in pass-through charges in their electricity bills over the next three months. For non-residential customers, the impact will vary according to rate category and load factor. 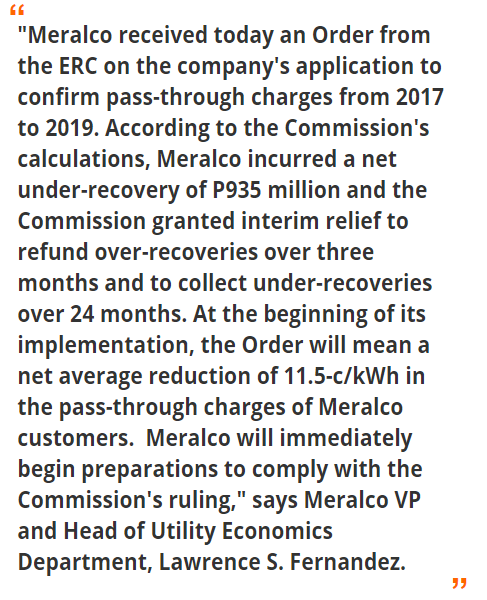 ERC validated the over recoveries in the pass-on charges when it reviewed Meralco’s submitted data for the period January 2017 to December 2019. The same data, however, also confirmed that Meralco also incurred under recoveries in the Generation Rate (GR).

In its order, the ERC directed Meralco to refund the over recoveries at an average rate of P0.1331/kWh, over a period of three months until it is fully refunded. On the other hand, Meralco will collect the computed under recovery in the GR, with an equivalent rate of P0.0395/kWh, over a period of approximately 24 months until it is fully collected. This will start in the next billing cycle upon receipt of the order. All in all, Meralco incurred a net under-recovery of P935 million.

To ensure transparency in the implementation of the order, Meralco was required to reflect the over- and under-recoveries in the monthly computations of the GR, TR, SLR, LSR and SrCSR as “OGA” for Generation, “OTCA” for Transmission, “OSLA” for System Loss, “OLRA” for Lifeline Subsidy, and “OSrCSR” for Senior Citizen Subsidy. Meralco has to submit within 10 days from its implementation a sworn statement indicating its compliance with ERC’s Order.

Distribution Utilities (DUs) are required under ERC Resolution Nos. 16, Series of 2009 to file their respective applications to the ERC once every three years in order to ensure that the recovery of the various pass-through costs is fair and proper.

“Let it be emphasized that the Commission, in acting on the pass on charges confirmation, has the consumers’ welfare as its primordial consideration. We will find means, such as stretching the collection of any under collection over a longer period and effecting a quick refund for over collection, in order to temper the impact on the consumer’s bill,” Devanadera said.

Upon receipt of ERC’s order, Meralco said it would immediately start preparations to comply with the Commission’s ruling.

To learn more, call 16210 or email us at customercare@meralco.com.ph.