Why are Power Rates Lower for September?

Why are Power Rates Lower for September?

Meralco continues invoking force majeure provisions in its various electricity supply contracts because of reduced electricity demand due to the COVID-19 pandemic, which continues to drag down power rates in the Meralco franchise area. 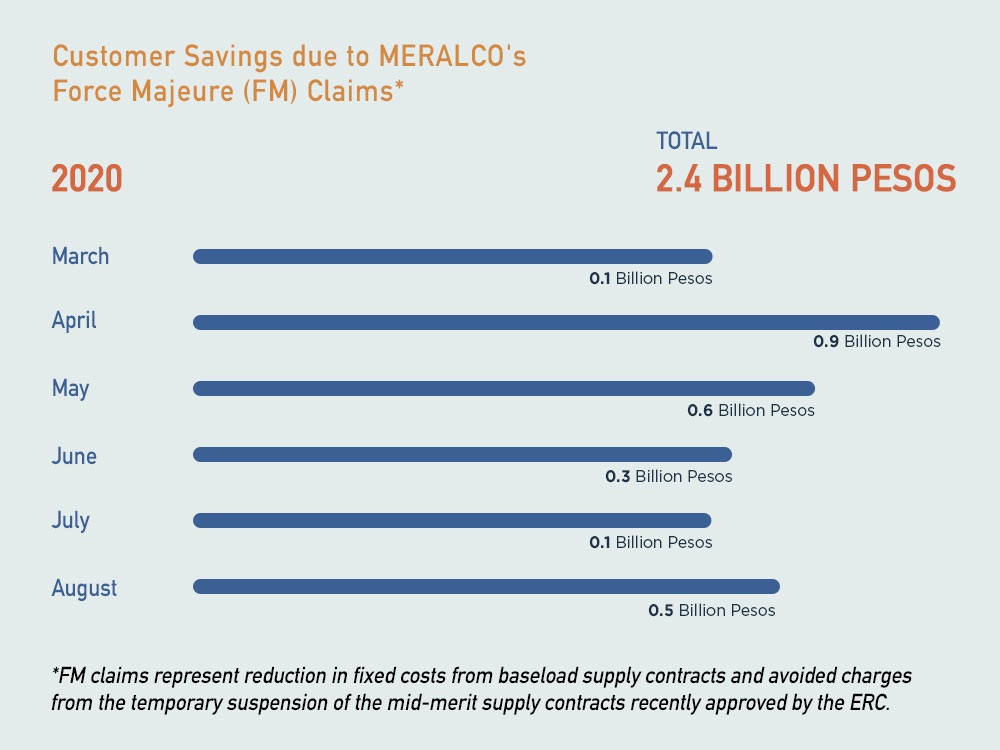 Meralco’s action has trimmed for the sixth straight month in September’s generation charge, pushing power rates to their lowest since September 2017. Force majeure claims in September alone total P463 million, or around P0.1710 per kilowatt hour in generation charge savings for consumers. Savings for the past 6 months total around P2.4 billion.

“If not for the force majeure claims, generation charge and total power rates would have risen by around P0.13 per kilowatt hour,” Meralco spokesman Joe Zaldarriaga told a virtual news conference.

Charges from power supply agreements, which account for nearly 55% of Meralco requirement, declined by P0.3032 per kWh due to the claims.

Lawrence S. Fernandez, vice president and head of Meralco’s utility economics said, “The main reason for our invocation of force majeure is the substantial reduction in demand. But we will have to assess the situation.”

Fernandez indicated, however, that the declining trend in power rates may be at its end given the improvement in demand in early September with the easing of quarantine restrictions and the outages of some power plants that nudged prices in the electricity spot market.

“We are hopeful that demand will continue to rise with the improvement in economic activity,” he added.

Wholesale Electricity Spot Market (WESM) charges were P0.0147 per kilowatt hour lower for August due to decrease in Luzon demand as some areas, including Metro Manila and adjacent provinces, returned to Modified Enhanced Community Quarantine from August 4 to 18. The share of WESM to Meralco’s supply needs was 11.6%.

The cost of power purchased from Independent Power Producers, meantime, rose by P0.0601 per kilowatt hour mainly due to lower average plant dispatch.

To learn more, contact your Meralco Relationship Manager or call 16210.